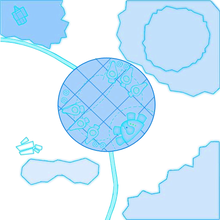 Umbara is a planet located in the Ghost Nebula of the galaxy. This planet is often referred to as the "Shadow World," due to the lack of sunlight it experiences. The planet is known for its Doonium reserves, as well as its dark, overgrown surface.

The planet in-game features a wide variety of details, ranging from the Umbaran base, to the rancor hidden away in the forest. A Trandoshan camp is situated in close proximity to an ancient Sith temple, and the map even includes multiple Umbaran war bunkers as dungeon missions.

1 of 5
Add photo
Retrieved from "https://cwaemu.fandom.com/wiki/Umbara?oldid=2555"
Community content is available under CC-BY-SA unless otherwise noted.